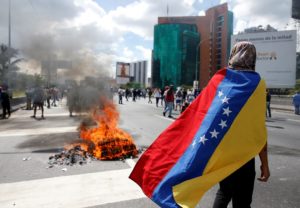 The Latin American nation of Venezuela has seen its ongoing crisis deteriorate over the past several years. With massive hyperinflation, a broken healthcare system, limited access to goods or employment, and increasing disease spreading through the country, the number of refugees streaming into neighbouring countries has been steadily increasing. So what is the Venezuelan crisis, and why have the past few years seen this crisis worsen?

Venezuela has been ruled by the United Socialist Party since 1999 when President Hugo Chaves came into power. Venezuela sits on the world’s largest oil reserve, and President Chaves took advantage of this fact, using oil exports to fund numerous public programs to alleviate the extreme poverty that has long plagued the country. Simultaneously, the Chaves government has been heavily criticized for mismanaging the country’s finances, and for diminishing the country’s democratic systems.

In 2013, Hugo Chaves died and was consequently succeeded by fellow party member Nicolas Maduro, who has remained president to this day. Shortly after the death of Hugo Chaves, the country was thrown into a turmoil of which it has never recovered. In 2014, the price of oil collapsed, and with 95% of Venezuela’s export revenue coming from oil, the country entered hyperinflation and was forced to cut many of its socially funded programs. This has also left the country unable to repay its international debts.

This has since worsened, with hyperinflation leaving the country unable to provide enough food or goods for its citizens. Citizens are now allocated days in which they are allowed to shop at supermarkets, due to the extreme food shortages. The health system has also ceased to function effectively, which has seen the re-emergence and spread of infectious diseases, including tuberculosis and measles. Furthermore, protests against the government have been met with lethal government force. Many civilians have been killed over the past two years, most notably during a string of protests from April to June last year which saw the death of 163 protestors.

Consequently, the UNHCR has reported a growing number of people fleeing the country to neighbouring South American nations. The reasons for fleeing are varied and many, with UNHCR spokesperson Aikaterini Kitidi listing the reasons, including “insecurity and violence, lack of food, medicine or access to essential social services as well as loss of income”. She further added that “while not all Venezuelans leaving are prompted to do so for refugee-related reasons, it is becoming increasingly clear that, while all may not be refugees, a significant number are in need of international protection”. One nation facing the greatest influx is Brazil, who now sees approximately 800 Venezuelans crossing the border every day. Since the beginning of 2017, Brazil has accepted over 52,000 Venezuelans.

With international pressure mounting on the Venezuelan government, and the number of Venezuelans fleeing the country growing, some have called for change. One of those is US President Donald Trump, who last year stated “we have troops all over the world in places that are very, very far away, Venezuela is not very far away and the people are suffering and dying. We have many options for Venezuela including a possible military option if necessary.”