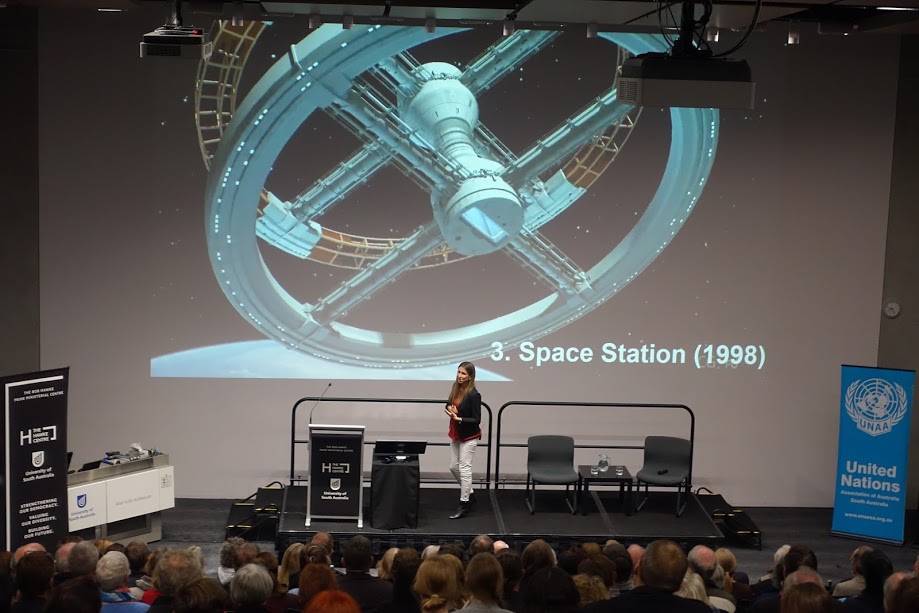 Reference to science fiction films and TV shows was inevitable, and we got some of the big ones, including “Star Wars”, “Star Trek”, and Stanley Kubrick’s prophetic 1968 film, “2001: A Space Odyssey”.

The Rise of New Space Endeavours in Australia, an initiative of the United Nations Association of Australia SA Division, was presented in partnership with The Bob Hawke Prime Ministerial Centre at the Allan Scott Auditorium, UniSA City West Campus, on the evening of Thursday 28 June. (A podcast of the event is available via The Hawke Centre website.)

In his introduction, Michael G Smith, National President of the UNAA, clearly set the UN context for this event by referencing the Outer Space Treaty of 1967. This treaty, established during the period of the Cold War, has been ratified by more than 100 of the 193 member states and has never been violated.

The audience of more than 300 were then informed, inspired and engaged in a passionate presentation by Flavia Tata Nardini, CEO, Fleet Space Technologies.

Using striking audio-visuals, and her boundless enthusiasm and positivity, Flavia swept us along as she talked about her own venture, and, more widely, about how new space technologies are changing industries in Australia and around the world.

She left the audience with so much to think about, but perhaps Flavia’s best “take-away” gift was a statement that she has obviously taken to heart.

“The best way to predict the future is to create it.”