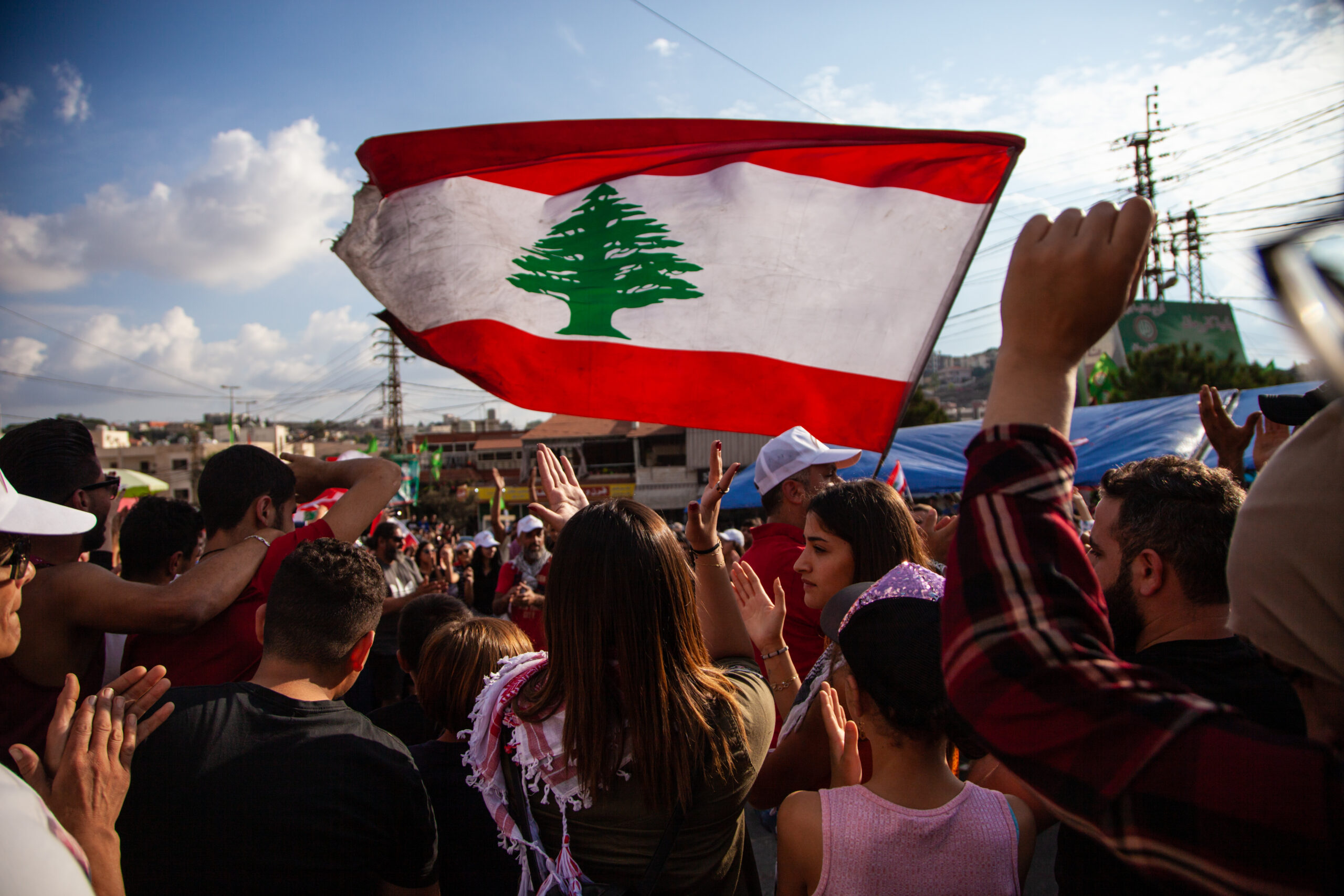 While the world battles through a pandemic, Lebanon is simultaneously striving to survive an unprecedented economic crisis and an indiscriminate wave of famine, ultimately fuelling a political revolution. If that wasn’t enough to devastate the community, on the 4th of August, Beirut city was shaken to its core and shattered into pieces after 2,700 tons of neglectfully stored ammonium nitrate exploded on port Beirut, the explosion felt and heard from Cyprus and 200 kilometres away into the Mediterranean. The reverberations proved to be enough to force the government to resign.

The mushroom cloud covering the city was a symbol of people’s decades of outcry, which has now devastatingly forced them into years of mourning. With a soaring death toll and hundreds missing, who’s to blame and how could this have happened? It’s yet another repercussion of the alleged political corruption and inadequate fulfilment of the most basic duty, the protection of human lives.

With only dead-ends in sight, citizens have been forced to choose between protesting for a political change and migrating to seek a better world of opportunities abroad. Typically, this demographic would consist of the young Lebanese millennials, who not only seek to provide for themselves abroad, but also for their parents and families whom remain behind. It is for these young Lebanese expats that a paradoxical world awaits – one which provides a new lifeline of hope yet at the cost of tearing their families apart.

Political and Economic events in the lead up

The growing unrest had been gathering pace since October 2019, when protesters first took the streets in a peaceful uprising calling for the resignation of the government after an exhausting 30 years of extreme political corruption. However, new lows were reached in 2020 following the collapse of the local Lebanese currency, causing a dramatic soar in inflation and a national unemployment crisis. With despair and anguish protestors called for an investigation of the political elites who have believed to have robbed treasury dry over a period of decades, leading the economy into the most catastrophic state it has been in since the 1975-1990 civil war. It was a victory for these protest when the government resigned on the 10th of August, though lasting change will need to wait through a caretaker government and a possible election.

Lebanon, the Jewel of the Middle East

Throughout the region, Lebanon is often referred to as the ‘jewel’ or ‘Switzerland’ of the Middle East. While it is the smallest recognised sovereign state in the Asian continent with a humble surface area of 10,452 km², nevertheless its influence within the region is immeasurable.  It’s fabled for its extraordinary nightlife and flourishing entrepreneurialism. Lebanese residents are also no strangers to academia, with the majority of the population being highly educated and trilingual, speaking Arabic, French and English (Baladi, 2018).

Lebanese Journalist and LBC news anchor Mario Abboud expressed his thoughts on the current economic situation and his view of the upcoming Lebanese generation,

“I believe the young Lebanese generation is not only highly educated but has great potential. Due to the hard circumstances we all live in, the extremely limited job vacancies…the challenging environment made them stronger, wiser, more creative and resilient to stressful jobs. Lebanese youth are able to endure tough roles, that’s why they succeed in any position, inside and outside Lebanon.”

Lebanese people have long stood out in the Middle East for being ‘unbreakable’ – despite enduring lingering civil wars and ongoing political turmoil, they are able to maintain high spirits and continue to enjoy the better things in life. Their unique resilience even saw night clubs and hotels open through times of war and political instability. Unfortunately, decades of consistent corruption and the bitter taste of the impending famine has bled people dry of hope and drowned them in fear, presenting them with a simple ultimatum – protest for change or leave.

However emigration is also by no means new to the country. Work opportunities do not cater for the high calibre of upcoming academic achievers, continuously forcing out waves of citizens to seek employment abroad. Despite varying estimates, with numbers between three and four million, there is no confirmed information on the large size of Lebanese diaspora (Verdeil, 2019). Australia alone is home to over 78, 000 Lebanese-born residents and over 230 000 with Lebanese decent (Australian Government, 2018).

In addition to the existing lack of employment opportunities, inflation is at its highest it has ever been in Lebanon’s history (Arnold, 2020). Food prices have soared by 190 percent and basic commodities have become unaffordable. According to World Bank, half of the population is now living under the poverty line, with the middle-class having rapidly slipped under in recent months.  This comes after the World Bank’s warning in November 2019 when it estimated the percentage of poverty could increase from 30 percent to 50 percent if the country does not take immediate action (The World Bank, World Bank: Lebanon is in the Midst of Economic, Financial and Social Hardship, Situation Could Get worse, 2019).

Since October 2019, the value of the Lebanese pound (LBP) has depreciated by approximately 75% on the black market with the country’s inflation now standing as the 3rd highest in the world (Noueihad & Kraiche, 2020). The population is grappled by the fear of anticipated starvation as the economy spirals into hyper-inflation. The last time the country faced famine was in 1915 – 1918, which resulted in half the population dying (Tanielian, 2012). In April, Aya Majzoub of Human Rights Watch claimed that millions of Lebanon’s residents are at risk of famine during the pandemic-lockdown if the government doesn’t provide urgent assistance (Majzoub, 2020).

The Lebanese currency has been pegged to the US dollar for decades, which had previously granted the country with greater import power whilst creating a country that’s highly reliant on importation. However the collapse of the Lebanese pound along with nation’s banks’ restrictions on all transactions has led to a huge decline in imports, causing a major shortage of goods in the country. In economic terms, GDP per capita has steadily declined from 2010, declining by over 25% (The World Bank, 2020).

Supermarket shelves are emptying of food and commodities while hospitals are facing life-threatening shortage. Meanwhile a critical shortage in diesel and fuel has left the country grappling with record-high rationing hours of over 16-hour power outages a day, while traffic and street lights no longer operate. Furthermore, many businesses have shut down after falling victim to the currency exchange rate crisis, driving the country into a deeper unemployment calamity.

Meanwhile Covid-19 has exasperated the situation, driving the country towards a worsening health crisis. The already-inadequate medical sector is now struggling to survive. Hospitals are forced to limit provisions to emergencies which include chemotherapy, dialysis and other major lifesaving treatments.

A new wave of expats

These life-threatening circumstances are driving people onto the roads every day to protest, while convincing others that immigration is their second chance at life. However, with an explosion that has decimated a people who already did not have much left to give, the chances of a fulfilling life in Lebanon is rapidly proving impossible. the toil and pain for a Lebanese expat doesn’t cease at their point of departure.

On most occasions, Lebanese expats face the pressure of having to financially support their parents back home while dealing with the psychological toll of being physically distant and incapable of providing solace. Now with the country in ruins and in urgent need of international aid, solace is a word uttered out of desperation. Lebanese social media political activist, Amani Khaled Danhach speaks of her experience as a Lebanese expat currently living in Dubai in the search for employment:

“I never thought I would leave Lebanon, I was against leaving, but reality sometimes is different from what you want or wish for. …We as a family are very close. Living abroad I had to compromise this feeling of being around mum and dad, around my friends and my society and it hurts. It hurts the most when your dad gets sick and you cannot be next to him because you have to work abroad (my siblings and myself) in order to support him and try to provide him with what (is) needed for his sickness. It hurts the most when days pass, then months then years and you are away from you parents, from the happy moments around them. It hurts the most when that phone call shatters you to pieces, breaks you and causes you the pain that you’d never thought you would face yourself… the phone call that tells you your dad is gone.”

For Lebanon to resurge from the dust, it needs an urgent political reformation with a complete change of ideology under a newly elected government. The key protest demands include an end to corruption, an end to the sectarian political system, recovery of stolen funds along with persecution of those responsible and fair taxes (Amnesty International, 2020). One can’t help but feel that these demands will all have to be swiftly addressed for calm to be restored. Future leaders will need to tackle these concerns aggressively and with early success if they want to avoid history repeating itself. At an individual level, if Lebanon’s catastrophe has provided any lesson it would be one in empathy, both at state level and between individuals. In Australia, this lack of empathy can be seen in both the increasingly difficult visa application process and the controversial off-shore detention policy concerning refugees. Living as an expat is living with a never-ending sense of longing for what was and hoping for what is to come. This plight is one that is often unbeknownst to many, and unrecognised by policy makers. Helplessly witnessing Beirut destroyed, and loved ones suffering from the other side of the globe, is a pain which no international aid can alleviate, but perhaps more endurable when others make genuine effort to understand. It’s a heartbreak the size of 10,452 kilometres squared.

In dedication to all expats around the world, to all families that have torn apart and to every tear drop shed at every airport departure gate.

The World Bank. (2019, November 6). World Bank: Lebanon is in the Midst of Economic, Financial and Social Hardship, Situation Could Get worse. Retrieved from The World Bank: https://www.worldbank.org/en/news/press-release/2019/11/06/world-bank-lebanon-is-in-the-midst-of-economic-financial-and-social-hardship-situation-could-get-worse

Biography– Priscilla Mardini Rehayem has studied a Masters  of Journalism and Communications and a minor degree in political science. She currently works in the media communications realm and also practices journalism for publications. Her passion for humanitarian causes has seen her dedicate her efforts to raise awareness of national and global issues within United Nations Australia (UNNA) and through other initiatives within the community.