The Memorial is comprised of three main elements which together physically represent the roles of Australian Peacekeepers – military, police, and civilians – in the service of international peace and security.

The first element is the two black polished masonry Monoliths symbolizing the “opposing forces of conflict” while the passageway of golden light between them created by the backlit onyx stone represents the “light of hope for the future” through peace and security brought about by peacekeepers.

Through the passageway of light is the second element, the Cobblestone Courtyard, a peaceful gathering space for personal reflection and ceremonial purposes. On the courtyard surface are bronze plaques inscribed with words describing the personal traits of Australian Peacekeepers progressing to the values, actions, activities and finally the objectives of international peacekeeping as the plaques advance across the courtyard in parallel with the path of travel from front to rear. 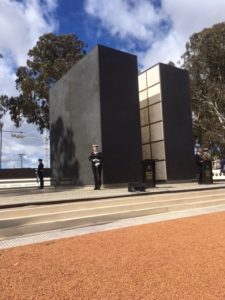 At the rear, the peaceful ambience of the courtyard is contained by the third element, a single massive black polished masonry Commemorative Beam denoting the strength and stability that results from peacekeeping activities. Bronze facings on the beam are inscribed with the United Nations and other international peacekeeping missions and campaigns in which Australian Peacekeepers have participated. Below the beam is a white concrete inclined plane surface with bronze fixings for placing commemorative wreaths or remembrance flowers.

Crests displayed at the front of the Memorial are those of organisations under whose auspices Australian Peacekeepers have operated and at the side, organisations from which they have been drawn.