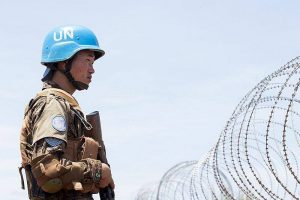 The UNSCR 2304 was drafted in response to the recent outbreak of civil unrest on 7 July caused by opposing sides of the Sudan People’s Liberation Army (SPLA). The resolution demands an immediate and permanent ceasefire from the state and implements a strict arms embargo. The resolution sets the general mandate for the United Nations Mission in South Sudan (UNMISS), based in the capital city of Juba, to “secure the environment around Juba” where most of the clashes have taken place.

Nearly one year after the anniversary of the August 2015 peace accord and five years since the country achieved independence, the conflict has created a host of humanitarian and security issues within the young state. UNSCR 2304 has been cited by UNSC members as a necessary step to address the tense and fragile state of affairs, as supporters of President Salva Kiir and those of Vice President Riek Machar have failed to make any diplomatic progress since the escalation. Government forces have been accused of destruction to civilian populations, sparking international concern.

The humanitarian aspect involves more than just those at risk of direct violence. With nearly two million South Sudanese displaced since December 2013, food security and the spread of disease is now of dire concern. More than 1.6 million of those displaced are within South Sudan while over 900,000 have fled to neighbouring states, placing undue stress on already limited and fragile systems. While Uganda opened a new settlement for refugees in the town of Yumbe, the capacity of 100,000 will quickly reach its limit while neighbouring Sudan, Central African Republic and the Democratic Republic of Congo (DRC) have also been faced with hundreds of thousands of people crossing their territorial borders. The DRC is not without its own issues, just days ago witnessing a machete attack by the Allied Democratic Forces that killed 64 civilians. In and around South Sudan, an outbreak of cholera has been exacerbated in locations wholly unprepared for such masses of people. The UN High Commission for Refugees (UNHCR) has had to expand its scope into new areas, however its resources are critically limited. Other programmes have been forced to a standstill as the UNHCR has received only 20% of the necessary $608.8 million required to deal with South Sudan’s refugees.

While the Resolution does not deal directly with the issue of displaced persons, re-establishing security is the first step toward improving the situation. The overall quota of UNMISS troops, previously capped at 12,000, now allows up 17,000 troops, 4,000 of which will be committed to a peacekeeping group known as the Regional Protection Force.

The abstentions to the vote were important to note as they support the view held by the South Sudan Transitional Government of National Unity that peacekeeping missions require the consent of the conflicting parties.  The abstentions from Russia, China, Venezuela and Egypt highlighted the need for acceptance of a peacekeeping mission by the parties concerned. Those states instead called for more diplomacy and discussion in the face of this ongoing conflict and expressed concern that the peacekeeping mission could impede the political process and worsen the situation on the ground.