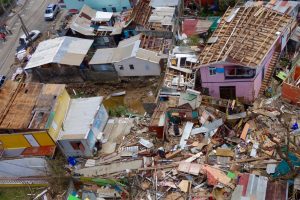 Less than two weeks ago, Hurricane Maria ravaged through the Caribbean, tearing apart homes, wiping out key infrastructure and agriculture, and causing major flooding and landslides across several countries. Days, after it was hit by Hurricane Irma, the Caribbean island of Dominica, was completely decimated by Hurricane Maria, the most powerful storm in the country’s history. According to the UN Office for the Coordination of Humanitarian Affairs (UNOCHA), Maria directly affected the entire Dominican population, damaging homes and livelihoods, all of the country’s health facilities and 100 percent of agricultural crops.

“Dominica has been badly battered and needs to be rebuilt,” said World Food Programme (WFP) Regional Director for Latin America and the Caribbean, Miguel Barreto.

Delivering humanitarian aid to remote villages remains a huge challenge as many roads and bridges were destroyed. Ten metric tons of WFP high-energy biscuits were transported to the island by ship this week and then delivered to communities in the remote interior by helicopter and to coastal communities by boat. Overall, WFP plans to provide a range of food assistance to approximately 25,000 people for three months. The organisation is currently working with the Government to develop a system that supplies hurricane-affected people with food vouchers to be used in local markets once they reopen.

The UN food agency’s emergency efforts are part of a larger UN operation to provide a range of assistance including disaster relief, humanitarian coordination, shelter, and water. The UN Humanitarian Response Depot (UNHRD) has been airlifting critical emergency supplies, including mobile storage units and pallets, tarpaulins, boats, and electric generators. With the sheer scale of the destruction impeeding relief efforts, officials believe the recovery process will be ongoing and cost billions of dollars.

In consultation with the Government of Dominica, the humanitarian community launched a Hurricane Maria Flash Appeal for Dominica. The Appeal seeks US$31.1 million to reach 65,000 people within the next three months – September to December 2017.