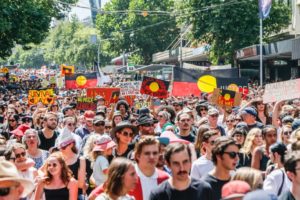 ‘Invasion Day’ rallies were held in every capital city on Australia Day last week, with the largest turnout, an estimated 50,000+ people in Melbourne listening to various activists. Professor Gary Foley in Melbourne spoke at the event saying, ‘If we keep mobilising these numbers, governments cannot ignore us’. Foley was referring to the crowd sizes which were smaller in previous years, and which this year outnumbered those at Melbourne’s official Australia Day event.

These protestors are urging for a change of date for Australia Day because January 26 is the date on which the English arrived in Sydney Cove. This was the date that Captain James Cook raised the Union Jack, marking Australia as a British Colony. Those who support ‘Change the Date’ argue that January 26 is an inappropriate day to hold national celebrations, as this is a solemn day for Indigenous Australians, which marks the beginning of the genocide against their ancestors, culture and language, of which the impacts are still being felt today.

The ‘Change the Date’ campaign is, however, a contentious issue in Australia, amongst both the general population and within the Indigenous population.

Indigenous leader Warren Mundine spoke out on Australia Day on what he calls a “disgraceful” debate. Mr. Mundine, who agrees that the date should be changed, believes that the debate has become too divisive in the way that it is being played out and that it is only serving to divide the country, namely due to abuse being hurled from each side. He has also spoken out on the fact that changing the date will not change any material aspects in the lives of Indigenous people, stating, “if you want to make us feel good, then let’s start dealing with the unemployment, the health and the education of Aboriginal people rather than dealing with this issue”.

Indigenous Counsellor Jacinta Nampijinpa used January 26 to express her support for maintaining Australia Day on that date. While Ms. Nampijinpa differs in opinion to Mr. Mundine on the issue of changing the date, she does agree with him that the debate has become divisive and vitriolic. On this, she states that “the vitriol that has been directed at me, as an Aboriginal woman, for voicing my opinion and for encouraging a healthier way of thinking, has been far, far worse than any alleged racist sentiment claimed to come from the celebration of Australia Day”. She also argues that she has lived her entire life in the Northern Territory and spent much time in Indigenous communities, and has only ever seen celebration, enjoyment, and pride from Indigenous Australians on January 26.

Regardless, the New South Wales Aboriginal Land Council argues that the feedback it has received from its 25,000 members reveals that there is overwhelming support the ‘Change the Date’ campaign amongst Aboriginal Australians. Council Chairman, Roy Ah-See, who serves on the Prime Minister’s Indigenous Advisory Council, said, “Change the date, and we’ll be the first one to RSVP because it’s about celebration and we want to celebrate together. But unfortunately, it’s just not the right day for Aboriginal Australia”.

And while momentum is building each and every year for a date change, it does not appear that change will occur soon, with both sides of the political fence opposing a change. When recently quizzed on a change of date, Mr. Turnbull affirmed, “We recognise that the history of European settlement in Australia has been complex and tragic for Indigenous Australians. We recognise all the complexities and challenges of our history. But above all on Australia Day, we recognise and we celebrate our achievements as Australians”. These sentiments are mirrored by Opposition Leader Bill Shorten.

With no apparent signs of change in the near future, we are sure to see this contentious and controversial debate intensify each and every January 26.