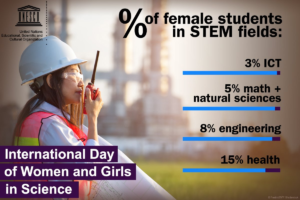 Bridging the gender gap in science is vital for achieving sustainable development and fulfilling the promise of the 2030 Agenda to “leave no one behind”. Although science-related fields are critical to national economies, most countries, industrialised or not, have not achieved gender equality in Science Technology Engineering and Mathematics (STEM) at every level of the education system. That deficit feeds the employment gap. According to estimates by the UNESCO Institute of Statistics, women currently represent less than 30 percent of the research and development workforce worldwide.

Long-standing biases and gender stereotypes are steering girls and women away from science-related fields. These biases set in early—for instance, a recent study in the journal Science showed that by age 6, girls are already less likely than boys to describe their own gender as ‘brilliant’, and less likely to join an activity labelled for ‘very, very smart’ kids.

Another study that surveyed 9,500 girls and young women aged 11 to 18 in nine European countries revealed: in Finland, 62 percent of teenage girls said that science was an important field, and yet only 37 percent said they would consider a career in that field.

The rapidly growing science and technology sectors are vital to national economies. Tackling some of the greatest challenges of the 2030 Agenda for Sustainable Development, from improving health to combatting climate change, will rely on harnessing all talent. That means we need to achieve a significant increase in the number of women entering and remaining in STEM careers.

One of the main tools for tackling gender inequality in the sciences is dismantling the barriers to girls and women, at home, in the classroom, and in the workplace. This requires a change in attitudes and the challenging of stereotypes. It is difficult for girls to believe in themselves as scientists, explorers, innovators, engineers, and inventors when the images they see on social media, in textbooks and in advertising reflect narrow and limiting gender roles. This is why UN Women is leading the “Un-stereotype Alliance” initiative, which encourages advertisers, tech companies and influencers to banish old-fashioned, stereotypical portrayals of gender in advertising that could diminish or limit the role of women in society. These inaccurate depictions can hinder women’s careers, including as scientific innovators. The future of jobs is in the field of science and technology, with 90 percent of future jobs requiring ICT skills, and some two million new jobs expected in the computer, mathematical, architecture, and engineering fields.

Fulfilling the vision of the Sustainable Development Goals requires innovative solutions powered by science and technology for a range of issues, from climate change, health, and infrastructure to economic development.

Read more: Initiatives for women and girls in science.