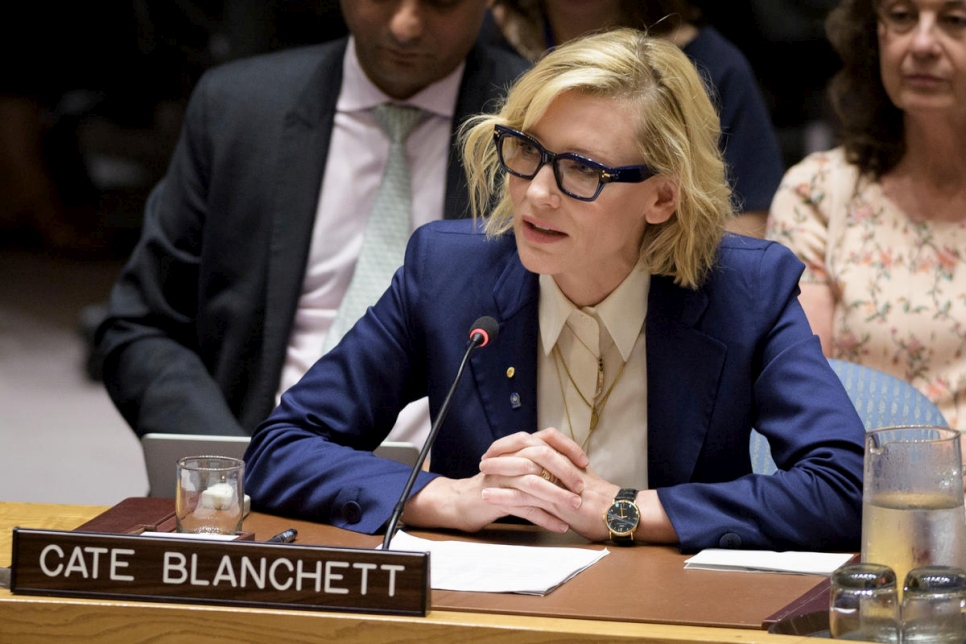 I am honoured by the opportunity to address the Security Council at this critical juncture. I am not here as an expert. I stand before you only as a witness. As someone who has seen and cannot look away.

I went to Bangladesh last March as a UNHCR Goodwill Ambassador, to see what I could contribute in responding to the massive humanitarian needs unfolding there.

Nothing could have prepared me for the extent and depth of the suffering I saw.

An eighteen year old woman who I’ll call Laila is chief among my memories. One of the 720,000 stateless Rohingya refugees who fled violence and abuse in Myanmar’s Rakhine State since last August, Laila fled her burning village with her infant son, Yousuf.  As she cradled Yousuf in her arms, she described to me how her husband was forcibly taken from their village and how he has not been heard from since.

How five days later, these same people returned, setting fire to her home and forcing her to flee alone with her baby. She saw her uncle killed by men with knives. She told me: “when I saw this, I just ran”. She and her son hid in a forest for months, surviving off plants and trees.  Her harrowing journey ended in Bangladesh, where her present hardship persists.

Another refugee family took her and Yousuf in, sharing their cramped shelter.

As I sat with Laila, a small child played behind me and I noticed terrible scars on his leg. When I asked how he came by these, his family told me he had been caught in the flames when their home had been torched. Luckily they pulled him free, but the scars will remain: both the physical and the psychological.

If only such stories were atypical.  But visiting with refugee families in Bangladesh, I found that they were shockingly routine.

Like you, I have heard the gut-wrenching accounts. Stories of grave torture, of women brutally violated, people who have had their loved ones killed before their eyes. Children who have seen their grandparents locked in houses that were set alight.

I am a mother, and I saw my children in the eyes of every single refugee child I met. I saw myself in every parent. How can any mother endure seeing her child thrown into a fire?

Their experiences will never leave me.

And this is why I am immensely grateful that the Security Council – the principle body responsible for maintaining international peace and security – is working in unison to resolve this crisis.

I am particularly thankful to you, Mr. Secretary-General, for giving a voice to the Rohingya for over a decade, and for continuing to demonstrate exemplary leadership on this matter.

And I must also pay homage to the former Secretary-General, the late Dr. Kofi Annan who has given us a clear and practical vision to resolve the crisis in Rakhine State. A vision shared by this Council and one which the Government of Myanmar has committed to implementing. A vision that, if realized, will ensure that women, men and children of different religions, ethnicities and backgrounds in Rakhine State can thrive collectively.

But as this Council and the UN work with the Government of Myanmar to ensure this, urgent efforts are still needed for the Rohingya in Bangladesh.

It is important to recall that this is not the first wave of massive forced displacement of Rohingya refugees from Myanmar to Bangladesh in the past 40 years. The scale of displacement is so large and so severe that today there are more Rohingya living in exile than in Myanmar itself.

In 1978, 200,000 Rohingya refugees streamed into Bangladesh, fleeing brutality and widespread abuse. Gul Zahar, a young Rohingya woman, was amongst those who fled.

Fourteen years later, in 1992, another wave of violence forced 250,000 stateless Rohingya refugees to seek safety once again in neighboring Bangladesh. Once again, Gul Zahar was amongst those who fled.

Today, there are 900,000 stateless Rohingya refugees in Bangladesh. Gul Zahar, now 90-years of age, is sadly amongst them once more.

Four decades following her initial flight, Gul lives in abject poverty in Bangladesh with the sole wish that her great grandchildren will have a better future.

The need for this future to transpire inside Myanmar has never been more urgent.

If we fail to act now, Gul’s grandchildren, like thousands of others, will be unable to escape this relentless cycle that generations of Rohingya have experienced.

Bangladesh’s recent response, receiving over 700,000 refugees in a matter of months and providing them safety, is one of the most visible and significant gestures of humanity in our time.  But the needs are vast. The suffering is acute. Much more international support is needed.

Thanks to the efforts of the Bangladeshi government, the host communities, UN agencies, NGOs and the refugees themselves, lifesaving efforts have ensured that the Rohingya refugees have endured the monsoons, largely unscathed.

Yet, as you yourselves have seen, they continue to live in squalid conditions.

With only 33 per cent of the refugee operation funded – amounting to less than 70 cents per person per day – this is not surprising. Rather, it is quite embarrassing.

Many Bangladeshi villagers living nearby, with very little to call their own, have been helping the Rohingya refugees over the past year. If people with so little can step up, why can’t we do better?

Refugees need to feed their families. They need clean water and sanitation facilities to wash, to cook, to clean. They need a secure shelter to weather the monsoons and the heat. Their children need an education. Their grandparents need to be cared for.

But they need more than just food and water, informal schools, temporary shelter. They need a future.

In the refugee settlements of Bangladesh today, women who were raped in Myanmar are now giving birth to children. These children, already burdened by statelessness, are likely to carry this stigma for the rest of their lives.

So many women, like Laila, along with their children, continue to be vulnerable to abuse and exploitation.

Many are still battling the scars of trauma and injury they received before and during their flight to Bangladesh.

It is imperative that governments, development and humanitarian agencies, the private sector and individuals work in solidarity to find innovative ways to help the refugees and the Bangladeshi host communities.

The focus of all our efforts must be to provide much-needed support inside Bangladesh while working to ensure conditions in Myanmar are conducive to return.

The many refugees that I spoke with consider Myanmar their home but they have real, deep fears about returning there.

Refugees move back home when it is safe and secure to do so.

The Rohingya cannot return to the very conditions they were forced to flee.

They cannot settle for half solutions.

They must know that they belong. A clear pathway to full citizenship is essential.

This is not a luxury.

This is not a privilege.

This is a basic right that all of us here enjoy.

A right that the Rohingya do not have.

I implore this Council not to forget this imperative and to support all efforts to make it a reality. In the meantime, to encourage more robust international support required to meet urgent and pressing needs within Bangladesh.

My mind often returns to Laila and her neighbours.

Did she find out what happened to her husband?

Did her shared temporary shelter survive the monsoons?

Did she manage to celebrate Eid last week?

Will her young son Yousuf be able to return home in Myanmar and go to school one day?

Or like Gul Zahar, will he too suffer an endless cycle of fear and forced displacement

Together, we need to change the future of Laila, of Yousuf, of Gul Zahar and of all the Rohingya living in Myanmar, in Bangladesh and beyond.

We have failed the Rohingya before.

Please, let us not fail them again.