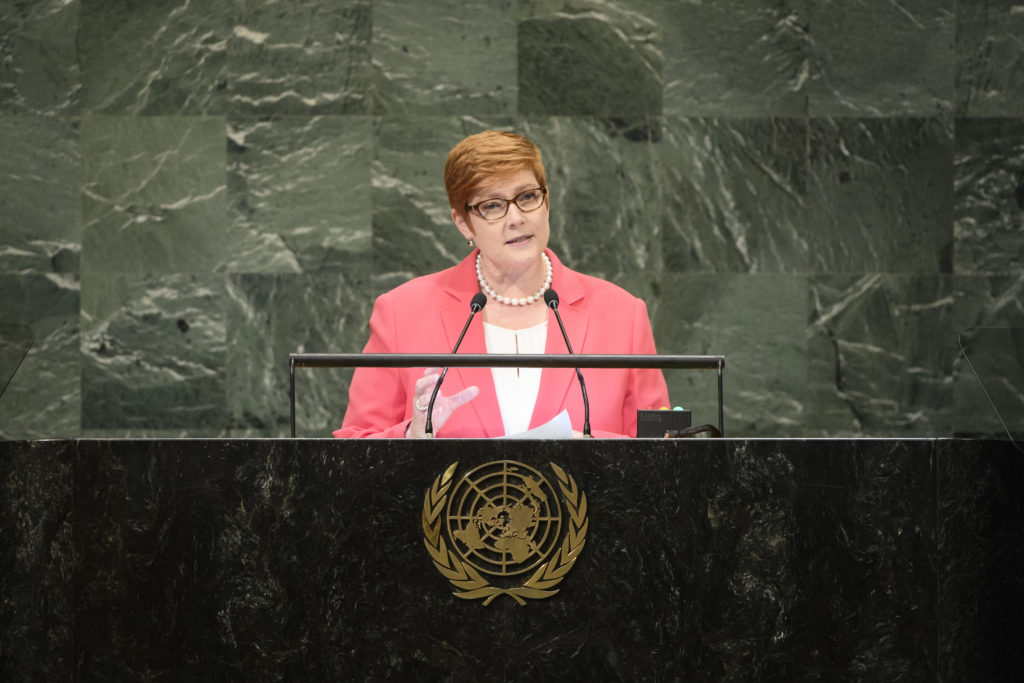 We are all proud members of this venerable institution.

If this place, and our membership of it, stand for anything, then we stand for an international order based on rules and cooperation.

This principle guides our actions, our dealings with each other, and our treatment of collective challenges as they arise before us.

Australia recognises the reality of a world in which the power of great states shapes the international system in which we seek to advance our national interests.  That is the grain with which we all work.

Equally, we hold true to this simple proposition – we will be safer and more prosperous in a world where global differences are managed, and global challenges met, by agreed rules rather than by the exercise of power alone.

Strong global cooperation sets a tone, and sets in place rules and norms, for constructive diplomacy in every region of the world.

Our most urgent global challenges won’t be solved by countries acting alone.  Solutions begin with collaboration.

In Australia’s 2017 Foreign Policy White Paper, we set out an analysis of the trends that are shaping the world. Most importantly, we set out our policy response.

In a more competitive and contested era, Australia is taking responsibility for our own security and prosperity.  At home, we are investing in our national resilience and strength, ensuring our economy is strong and Australians are safe.  We are sovereign and independent.

In our region – the Indo-Pacific – we seek a neighbourhood in which the rights of all states are respected and adherence to rules delivers lasting peace.

Internationally, we are committed to promoting and protecting the rules and institutions that support stability and prosperity, and enable collective action to meet global challenges.

Mr President, at this time of change, of challenge and opportunity, we Member State have the honour of preserving and advancing international rules and order, to deliver on the expectations of our people for a just, fair, and secure world.

One proof of the necessity of the United Nations is the hard fact that we cannot with all confidence rid the world of nuclear weapons, not today or this year.

Given this reality, we must redouble our efforts to prevent nuclear proliferation, and to build the international trust and confidence necessary to move towards a world free of nuclear weapons.

Our peoples expect us to continue to work towards verifiable nuclear disarmament with sound compliance, safeguards and enforcement regimes.

Overwhelmingly, our peoples expect us to prevent further proliferation of nuclear weapons. To do this, we must continue to build on the progress we have made through the Nuclear Non-Proliferation Treaty.

And for this reason, the world watches with anticipation the negotiations between the United States and North Korea, pursuing complete, verifiable and irreversible denuclearisation of the Peninsula, in accordance with UN Resolutions.  Australia will also continue to fully implement our obligations under the UN Security Council resolutions and maintain our own autonomous sanctions while awaiting real progress towards denuclearisation.

Mr President, Australia like the United Nations is committed to improving humanitarian assistance in fragile settings.  I commend the Secretary General for establishing the “United for Gender Parity” initiative, and for declaring zero tolerance for sexual exploitation and abuse.

Australia is also a robust and strong contributor to the UN’s Women Peace and Security agenda, first set out in UN Security Council Resolution 1325.

Examples of our work on this issue include a benchmark of a minimum of 15 per cent of female military members deployed on Australian peacekeeping mission teams, which I was proud to support over the past three years in my role as Australia’s Minister for Defence. Australia also has active training programs on Women Peace and Security in Afghanistan, in Iraq, and the Philippines, where our military is assisting partner forces to deal with counter-terrorism and counter-insurgency challenges.

Australia firmly believes that it is only through the inclusion of women in all aspects of peace and security initiatives, including negotiations, the design of peace processes, and the management and enforcement of peace programs, that lasting and resilient security can be achieved.

Mr President, many here will remember my predecessor and my friend Julie Bishop’s determined and sustained work pursuing accountability for the downing of Malaysia Airlines flight MH17.  Australia remains firmly committed to this objective, and we will continue working with our Joint Investigation Team partners to pursue justice for the victims and their loved ones.

In expecting other Member States to abide by international rules, we must also subject ourselves to these same standards and expectations.

On the 6th of March this year, here in New York, Australia and Timor-Leste signed a new Maritime Boundaries Treaty.

The Treaty was the successful result of the first-ever compulsory conciliation initiated under the United Nations Convention on the Law of the Sea.

The Treaty underscores Australia’s commitment to international law, and is testament to the way in which international law, in particular the UN Convention on the Law of the Sea, enables countries to resolve disputes peacefully and properly, abiding by the rules.

The conciliation process created the space for compromise and negotiation on what I acknowledge was a previously intractable disagreement, and ultimately strengthened bilateral relations.

Mr President, when Member States work together to uphold international law and the institutions that support it, the benefits accrue to all alike: the powerful and the weak, the large and the small.

This is a long-standing principle we share, regardless of our culture, our language, our religion or our political system: we are all equal before the law.

Mr President, Australia particularly welcomes the active engagement of the United Nations in our region, the Indo-Pacific.  It is a dynamic region which has experienced an economic transformation in recent decades that is unprecedented in human history.

The region’s rising prosperity has been built on a strong foundation of stability.

Australia is absolutely committed to ensuring that the fundamental principles which have enabled the region’s success are maintained.

We are committed to a region in which the rights of all states are respected.   A region characterised by respect for international law and other norms, and where disputes are resolved peacefully. And a region in which open markets facilitate the free flow of trade, capital and ideas.

Our aid program is an important mechanism through which we support the aspirations of our neighbours.   It is predominately and unashamedly focused on the Indo-Pacific region and geared to expand opportunities for people, business and communities to promote economic growth and to further reduce regional poverty.

We work in sectors that drive economic growth and human development, including aid for trade, infrastructure, education and health, and empowering women and girls.  And we work in ways that are most effective, including with UN Resident Coordinators, and through the region’s political, security and economic architecture.

ASEAN sits at the heart of our region. It is the collective voice of Southeast Asia.

There are good reasons why Australia is ASEAN’s longest standing dialogue partner.  We are both committed to driving continued strong regional economic growth and we share optimism for the future.  At the same time we share a conviction to tackle head on the security challenges of our region, including the fight against terrorism.

Australia’s interests are well served by ASEAN and our commitment to its success and continued effectiveness is stronger than ever.

That commitment was there for all to see at an ASEAN-Australia Special Summit, held in Sydney in March this year.  The Summit marked a new era in the Strategic Partnership between ASEAN and Australia. Leaders issued the Sydney Declaration, which comprehensively sets out ASEAN and Australia’s shared commitment to work together towards a more secure and prosperous region.

In other key pieces of regional architecture, the Asia-Pacific Economic Cooperation forum, or APEC, seeks to build upon the growing interdependence of the Asia-Pacific’s 21 member economies.  The APEC meeting in Papua New Guinea in November will be a further important opportunity to foster cooperation and economic activity across borders, to the mutual benefit of all.

I commend Papua New Guinea on the significant work it has done to host APEC 2018, and look forward in particular to a very successful Leaders’ Week in Port Moresby later this year.

I also commend our Pacific neighbour the Republic of Nauru for its successful hosting of the 49th Pacific Islands Forum in the first week of September.  With the theme of “Building a strong Pacific: our islands, our people, our will”, the member states, associate members, observers and dialogue partners of the Pacific Islands Forum continued a now long tradition of amity, consultation, partnership and policy development on diverse matters of climate change, economic reform, transport and trade.

Australia is committed to working with PIF Member States, and UN Resident Coordinators, to strengthen resilience to climate change and to natural disasters in the Pacific.  In all of this, the UN Development Programme is a vital partner.

Australia recognises that Pacific island countries are particularly vulnerable to the effects of climate change and to disaster, and that this is a leading priority for the region.  The Pacific Islands Forum Boe Declaration, released at the meeting last month by Member States, takes a contemporary view of security inclusive of human and environmental security and emphasises the importance of regional cooperation and collaboration in building resilience to disasters and to climate change.

Australia works for and seeks a region that promotes accountability and respects international law for the benefit of all nations and people.

Australia has been a strong supporter of the Independent International Fact-Finding Mission on Myanmar, and we have been deeply disturbed by its findings.

We are working with Myanmar and with ASEAN and regional partners, and international partners, to find long-term solutions to this complex crisis, including with Indonesia as co-chairs of the Bali Process and through joint humanitarian efforts in Cox’s Bazar.

Australia will continue to work with the Myanmar Government and the international community towards a long-term and durable resolution of the nation’s complex problems.

After 50 years of isolation and instability, Myanmar is at critical stage in its democratic and economic transition, and it is in all our interests to ensure that it succeeds.

Let us honour the late Secretary-General Kofi Annan by renewing our efforts to see fully and genuinely implemented the recommendations of the Advisory Commission on Rakhine State, which he so ably led.

Mr President, international institutions, and the United Nations in particular, help us to adapt collectively as our world changes around us. But as the Secretary-General said when he opened the General Assembly earlier this week, and I quote, “trust in global governance is also fragile, as 21st-century challenges outpace 20th-century institutions and mindsets”.

That is why Australia supports the Secretary-General’s work to reform the United Nations.

We need to work together to keep pace with the needs and aspirations of the people that we serve.

But to remain fit for our times, the United Nations must remain true to the founding principles, the universal rights and obligations, we agreed upon when we first came together as Member States.

Chief among these is the sovereign equality of all states.

Member States must re-dedicate themselves to the aspirations of the founders of the United Nations, and take to heart the Charter, so that our world is indeed a more just, fair and secure place to live.

Ladies and gentlemen, Mr President, thank you very much for your attention this evening.