Seeking Refuge in a Pandemic

Seeking Refuge in a Pandemic
by John Minns, 2020

Crises and shocks can bring out the best in people and societies. We’ve seen that in the selflessness of health care workers and in the countless acts of individual kindness during the COVID-19 crisis. But they can also expose weaknesses in structures, policies, parties and politicians. Around the world the pandemic has, often tragically, shown the problems with health care systems, with aged care, and with rising levels of inequality and insecurity of work. It has also shown that, for decades now, the world has not adequately addressed the problem of displaced people and refugees. By mid-2020, there were 26 million refugees and 79.5 million forcibly displaced people around the world – fully 1% of the world’s population. The reasons they fled their homes vary; war, political, cultural or religious persecution and ecological disaster head the list. But in all of these cases, their journeys were not frivolous choices. Their motivation was survival.

Eighty-five percent of these people now find themselves living in developing countries – those with the least resources to look after them. Forty percent of them are children. Most have already spent years in unstable situations without secure access to proper food, safe water, housing, work, health care or education. Compared to the scale of the problem, the efforts of the developed world to provide a future for these people have been puny. In 2019, just under 108,000 of them were resettled. The pandemic of 2020 has further revealed the feebleness of the international response to this continuing crisis. On occasion, it has illustrated the inhumanity of the richer parts of the world, including, and especially, Australia.

COVID-19 is a disease which thrives on the circumstances into which these tens of millions have been forced. Most are in crowded, unsanitary tent or makeshift shack camps with no possibility of social distancing, let alone contact-tracing or intensive care. In the world’s biggest refugee camp – Kutupalong in Bangladesh – over 600,000 Rohingya refugees, forced there by the genocidal attacks of the Burmese government, live in an area of 13 square kilometres – just over half the size of Melbourne airport. Hundreds of thousands of others live in camps nearby. Although very little testing is taking place, cases of COVID-19 are now being reported.

There are similar circumstances in huge camps in Kenya, South Sudan, Tanzania, Jordan, Turkey and elsewhere. Their inhabitants have often already been weakened physically and mentally by their journeys and by long stays in these conditions. A humanitarian disaster already present might now be compounded by a viral one.

Australia has the unfortunate distinction of pioneering some of the harshest measures towards people seeking asylum anywhere in the world. It began with mandatory detention in 1992. Detention centres were then built in the most remote parts of the country – such as Woomera and Port Hedland. In 2001, John Howard moved the detention of boat arrivals out of Australia altogether with “offshore” prisons in PNG and Nauru. In 2013, Kevin Rudd decreed that those who arrived by boat would “never” be resettled in Australia, whatever the justice of their claims. Thousands have suffered enormously as a result. That suffering is not an unintended consequence of these policies. The concept of “deterrence” on which they are based is that the consequences of coming to seek asylum by boat must be worse than the situation from which they have fled.

One of the legacies of these policies is that today there are still over 350 people trapped in PNG and Nauru. While Nauru is extremely isolated and has not – at the time of writing – reported any cases, neither country has a developed capacity to deal with outbreaks.

Within Australia, at the end of May, there were 1,458 people in immigration detention facilities. They had spent an average 553 days in detention. These facilities are simply not safe in the environment of a pandemic. They are designed to confine people – not for social distancing. Sleeping arrangements, meals, exercise are all set up to keep people at close quarters. Moreover, they are not isolated from the community in which the virus is spreading. Staff come and go each day and, potentially, bring it into a situation where detainees cannot self isolate or maintain a safe distance. This is the case with all detention. The New York Times reported in late June that the top five US hotspots for COVID-19 are all prisons. An American Civil Liberties Union study with various universities found that crowded prisons could contribute to the loss of an extra 100,000 lives. It is for these reasons that the UK Home Office released 300 people from immigration detention – a quarter of the total – in March.

Also in March, the Office of the High Commissioner for Human Rights, the International Organisation for Migration, the United Nations High Commissioner for Refugees and the World Health Organisation produced a joint press statement calling on governments to release refugees and asylum seekers in detention into the community. In the same month, the Australasian College for Infection Prevention and Control also called for the release into the community of those held in immigration detention because of the risk of infection.

But the Australian government has listened neither to these human rights bodies nor to the experts in infection control. Immigration detainees remain locked up during the crisis. About 120 refugees and asylum seekers, brought from offshore detention for urgent medical treatment, are housed in a hotel at Kangaroo Point in Brisbane. Photos from inside the hotel show beds separated by less than a metre and detainees and private security guards crowded together in dining rooms and corridors. Another 60 people are being held in the Mantra Bell hotel in Melbourne under similar circumstances. One guard there has already tested positive for COVID-19.

In addition to those in detention, approximately 116,000 people seeking humanitarian protection and applying for Permanent Protection Visa, or who are on the Bridging Visa E, a Temporary Protection Visa (TPV) or a Safe Haven Enterprise Visa (SHEV) will find themselves much more hard-hit during than the rest of the community. Many of these people are already in a precarious position without certainty for their future or secure work. A study by John van Kooy for the Refugee Council of Australia found that unemployment amongst those on temporary visas is likely to rise to 41.8%. It is thought that homelessness amongst this group will reach 12%. While the rules are complex, many of these people are not eligible for the Federal government’s COVID support safety net schemes.

If we are following medical advice, then those in immigration detention, including those brought here for medical treatment, should be allowed to live in the community and supported while there. All the evidence shows that this would not only be safer, it would even be cheaper. If we are, indeed, “all in this together”, then those who have come to us seeking safety and asylum should receive the same level of medical and financial support as all of us who find ourselves on this continent in these strange, difficult and dangerous times. Justice, humanity and science all demand that it be so. 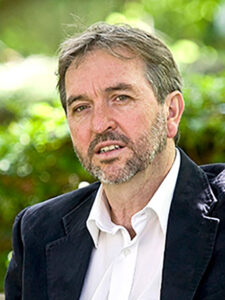 He has been a University Medalist, a Fulbright Scholar and a winner of a number of awards, including the Prime Minister’s Award for Australian University Teacher of the Year. His research is focussed on the political economy of development in developing countries, especially in Latin America. He has also been heavily involved in advocacy and writing on the treatment and rights of refugees  for over twenty years and is currently a member of the Refugee Action Committee in Canberra.