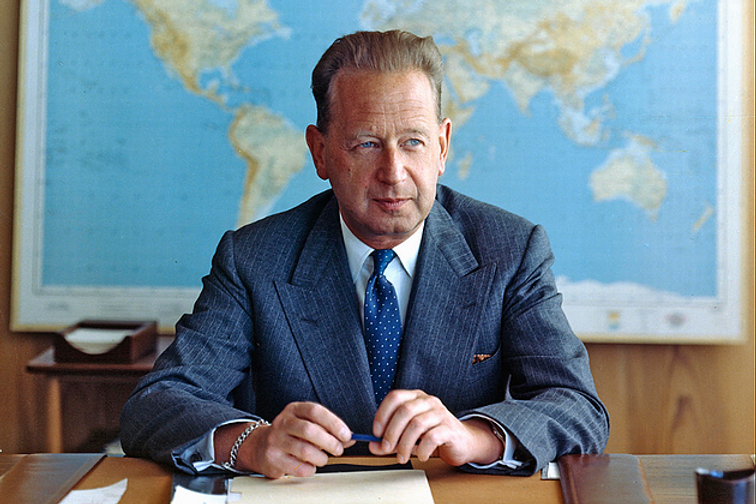 The first in our series of guest articles, Brendan Markey-Towle tells the story of former UN Secretary General, Dag Hammarskjold, a man as devoted to his duty as his search for good and beauty in his world. Brendan’s views are his own, and has also published this work on Medium.com

The life of Dag Hammarskjold, second Secretary-General of the United Nations, offers us the model of a statesman. A practical economist, profound philosopher, gifted poet, he must be the example of the next generation of leaders if humanity is to reclaim its future.

I recently had occasion to travel to Canberra on business. I remarked to my best friend upon arriving home in Brisbane that I felt deeply sad at what I had seen. By the age of 25 many of the country’s best young people had become jaded, cynical, tired. Not working for a better world but for the smaller victory of preventing fools (the most dangerous kind who don’t realise they are) from making it worse in their efforts to maintain power and build a cult to their leadership.

Every generation complains about the quality of their leaders, and singularly fails to realise their equal culpability. Being a means by which human viciousness wields the awesome power of the state, democracy merely reflects the moral degradation of The People. That the politicians have become so jaded, cynical, tired and desperate to please the vicious whims of a fickle voting mass as to break the spirit of the young signals a particularly advanced stage of political degeneration. This is worse than “ill fares the land”. This is the very basis of “the land” – humanity, dignity, integrity – dissolving.

The People, conversely, are by and large a reflection of their leaders. None of these leaders could write a great spiritual tract and some of the finest poetry of the age in their spare moments. The fact that you, reader, are currently scoffing at the idea shows just how debased and degraded our public life has become and how despicably little we have come to expect of it.

To counter what is not merely a depressing, but actually a dangerous state of affairs, the next generation of leaders must aspire to more, to stand in the face of moral decline and say “this ends now”. They must aspire to lift the eyes of the people from the gutter and inspire them to more by sheer force of character.

It is for that reason we must rediscover the life and example of the second Secretary-General of the United Nations, Dag Hammarskjold. Hammarskjold’s life of public service was so outstanding in an era of great statesmen that one of the very greatest, John F Kennedy, summarised him simply as “the greatest statesman of our century”. He shows us the more to which we must aspire.

The man: scholar and statesman

Dag Hammarskjold was born in 1905 into an illustrious noble Swedish family. His grandfather had been Prime Minister of the Swedish crown and his father was Governor of the province of Uppsala. His writings reveal that growing up he had a keen sense of who his family was, and the duty of public service resting on his shoulders.

At university, he would study all the regular subjects required of a public servant at the time, what would later be called “the humanities”, law and also economics. While working in the Swedish public service between 1930 and 1934 he would write a doctoral thesis on economics at the University of Stockholm, Konjunkturspridningen (“The Spread of the Business Cycle”). He would quickly be noticed for his talents as an economist.

What many might not know is that prior to his taking up the position of Secretary-General of the United Nations in 1953, Hammarskjold achieved in the Swedish government what already amounted to the lives of several Great Men. He served variously as Secretary of the Swedish Central Bank, as the highest ranking public servant in the Swedish Finance Ministry, as Chairman of the Swedish Central Bank, as advisor to the Swedish Cabinet, in high ranking positions in the Swedish Foreign Ministry, and eventually as a minister of the Swedish crown without portfolio (a term used the world over for the “fix it” minister). Upon his appointment to the post of Secretary-General of the United Nations, his achievements in maintaining some sort of peace in the frightening first decade of the Cold War became the stuff of legend, putting the efforts of subsequent Secretary-Generals in the shadow of his greatness from which none have yet emerged.

Hammarskjold was killed in a suspicious plane crash en route to broker a ceasefire in the Congo in 1961.

The very fact that John F Kennedy, president of the United States of America could give such a genuinely moving and emotional tribute to the General Assembly as he did to his efforts upon his death is astounding. One can hardly imagine any US president saying the same in good faith of any Secretary-General since.

He was clearly a deeply practical man and well versed in the ways of the world. The most effective statesman is the statesman who combines a deep and tangible insight into the functioning of the world with an ethic of practicing that knowledge.

Many of history’s great villains had this same trait though, and the effect they had was real, but devastating. George Bernard Shaw said the power of accurate observation is often called cynicism by those who don’t have it. The distinction between effective and good statesmen and effective and bad statesmen is that the former do not allow their cynicism of thought (which is merely accurate observation) to become cynicism in act.

To understand how Hammarskjold fell on the former side of this divide we need to understand the private life of the man, because we readily see his great deeds and achievements were merely reflections of his inner commitment to integrity, humanity and dignity.

The Markings: The spiritual visionary and the poet

Shortly after his death, associates were clearing Hammarskjold’s apartment when they found an unpublished manuscript with a note attached:

“If you find them worth publishing, you have my permission to do so – as a sort of white book concerning my negotiations with myself – and with God”.

They were published, and proof of the quality of the writing is made obvious by the fact that my own copy of Vagmarken (or “Markings”) is prefaced by Jimmy Carter and forwarded by WH Auden.

Markings consists of a collection of something between diary entries and ‘Montaignesque’ essays jotted down in spare moments by Hammarskjold from his teenage years all the way up to just before his death. They reveal his internal struggle to understand himself, his place in the world and his increasing reconciliation to his deep sense of duty. A quietly but deeply spiritual and religious man, they reveal, essentially, his efforts to understand his relationship with his God.

From the very outset one might almost read Nietzschean tones into the Markings. This was a man clearly aware of his talents and his duty to seek greatness in thought and deed. Hammarskjold was painfully aware of his sense of duty and the weight of history (his family’s and that he had the talents to create) on his shoulders even in his early twenties. The pain of this awareness was palpable, and leads him early in the Markings to rather dark places.

Not for Hammarskjold were the warmth of the human affection of friends and family. This was a man aware that his calling was a solitary and sacrificial one to provide others with a world in which they could better obtain those for themselves. The sense of duty incumbent upon a man of his talents to develop them and place them at the service of humanity to better their lives is palpable and poignant in the earlier years of Markings.

As the Markings progress, Hammarskjold reconciles himself to this understanding of his place in the world and the role he has to play in it by exploring his relationship to his God. His God is the God of the mystics (not the silly New Age types, the real ones), which is the Godhead, the Source, that which endows us our consciousness. His reconciliation to the great undertaking of his life comes about as a result of his inner journey to be fully in communion with the “God within”, with the source of our conscious experience, because this allowed him to fully experience and thereby understand the world and his place with it.

As Hammarskjold explores his relationship to his God and develops his communion with the Godhead to an ever greater degree, especially toward the end of the Markings he turns, as I suppose all men do as they age, to poetry to express experience which is inexpressible and his yearning for beauty. The poetry is not especially technically brilliant, but is endowed with a striking force which can only come from genuine feeling.

Hammarskjold’s poetry inspires a real sense of, and yearning for, beauty. It allows the reader to stand back for a moment and be elevated above the common filth and grime of the struggle against the tyranny of the quotidian to see poignant beauty and meaning even there, especially there.

This is the hardest and most critical aspect of reconciliation with the world and one’s place in the world. Hammarskjold, a lifelong bachelor who had daily to struggle to contain the worst of vicious humanity, not only achieved his reconciliation, but mastered it and found meaning in his life.

That this was jotted down by a high-ranking Swedish government official then United Nations Secretary-General in spare moments between (almost literally) saving the world fully justifies the admiration afforded it by WH Auden and then some besides.

In the great deeds of his life and the records of the inner life he left for posterity, Dag Hammarskjold sets an example for the people to follow of not merely how to lead a practical and prosperous life for oneself and others, but a good one such that the practicality and prosperity brought about by it means something.

The model statesman: they who inspire us to aspire to greatness

The People are, by and large, a reflection of their leaders. The mark of a great leader is not that they use the reigns of state power to implement sweeping change, moulding society in their image. The mark of a great leader is that they awake a People’s nobler sentiments, and by sheer force of character cause their eyes to be lifted from the gutter to aspire to more.

Very few men in history afford us the chance to affirm without doubt that they had these marks. Dag Hammarskjold is one of those men.

His great inner life manifested in the great deeds of his outer life. He was a practical man who sought deep and tangible knowledge of the world which he could practice. His searching for communion with the God within allowed him to recognise that same God in others, recognise them as conscious beings, and reconcile himself to committing his life to them. His inner life was the beginning of his integrity, the beginning of his humanity, and the source of his dignity.

His thinking, his philosophy and his leadership by sheer force of character causes us to lift our eyes from the gutter to aspire to more. His life shows us the more to which we must aspire, and gives us the model of how, as leaders, we may stand in the face of our precipitous and frightening moral decline and say “this ends now”.