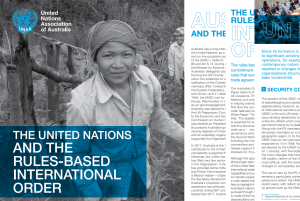 The United Nations Association of Australia has just released an educational special primer paper for policymakers on the critical role of the UN in the “rules-based international order”.

This definitive paper has been co-authored by the Australian Parliamentary Library and UNAA National President, Major General Michael G Smith AO (Ret’d). The paper’s executive summary explains that the value of a “rules-based international order” is a concept gaining increasing currency both in Australia and internationally. This means a shared commitment by all countries to conduct their activities in accordance with agreed rules that evolve over time, such as international law, regional security arrangements, trade agreements, immigration protocols, and cultural arrangements.

You can read the UNAA’s paper here.
﻿