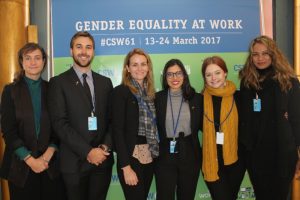 Monday, March 13 saw the opening day of the 61st Commission on the Status of Women (CSW) at the United Nations headquarters in New York.

The CSW kicked off in the General Assembly, with the first official meeting of the Commission. In this, ministers from all of the world’s nations met to open the event and give opening statements. The meeting was chaired by H.E. Mr. Antonio de Aguiar Patriota, and also included keynote speeches from the UN Secretary-General António Guterres, and Dr Phumzile Mlambo-Ngcuka, the Under-Secretary-General of the United Nations and Executive Director of UN Women.

From there, the week progressed with numerous meetings being held between governments, as well as side events for spectators such as lectures, debates and panel discussions. These events gave people an opportunity to ask questions to those who are at the top of their field. For example, there was a panel discussion hosted by the government of the United Kingdom, titled “Addressing the Gender Dimension of Modern Day Slavery.” The panel was comprised of various academics and professionals in the field of anti-slavery. Mr. Aiden McQuade, the chief executive director of Anti-Slavery International, argued that, despite the myth, slavery, for the most part, is still legal. Here, he gave various examples in which slavery still exists legally, but is not perceived as slavery as it is merely not referred to as such. This includes child marriage which is still legal in various countries, where the child is given little to no freedoms, and also migrant domestic workers, who travel to foreign countries to undertake work as domestic cleaners or carers, and are exploited upon arrival. Mr. McQuade referred to these examples as socially permissible systems of slavery.

At the same time, ministers from the world’s governments were meeting to create new agreements as to advance women’s rights globally. The Australian government representative at the CSW was the current Minister for Women, and Western Australian Senator, the Honourable Michaelia Cash. Negotiations are still ongoing, so the outcome of any agreements is still unknown; however, the Australian government is pushing for strong wording in agreements to protect and advance the rights of Indigenous women in particular. With negotiations coming to an end soon, keep an eye out for Australia’s new agreements in the pursuit of gender equality, not just nationally, but globally.