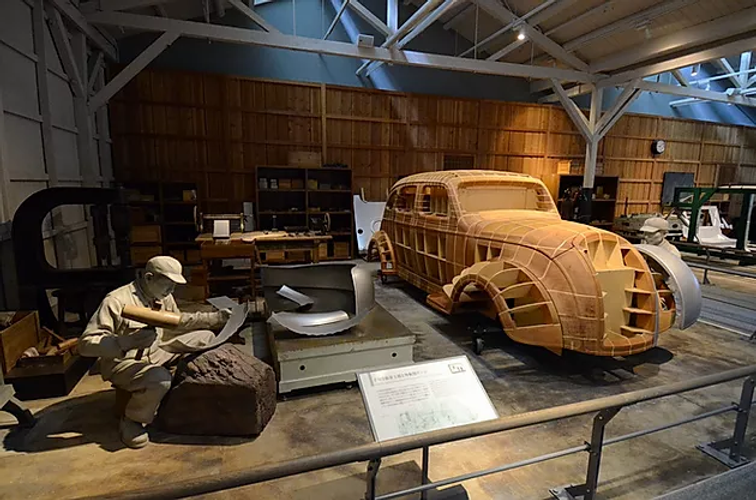 On a recent trip to Japan, I visited the Toyota museum, which is located in Nagoya, East of Tokyo. Originally named ‘Toyoda’ before the dropping of a diacritical on the third syllable for branding purposes, the company dealt mainly in the manufacture of textiles. The museum contains a series of working demonstration looms and weaving machines spanning the Indian spinning wheels that spread to England in the 14th Century, to the first industrialised spinning engines of the Steam Age, and finally more automated machines pioneered by Toyoda.

What struck me the most was the labour intensity that was involved with each stage of Toyota’s early textile production. The oldest wheels required significant effort merely to spool basic fibres, let alone begin the weaving process. Even manual looms used at the start of the 1900’s required a backbreaking manual effort to weave, despite advances to the preparation of material into thread. Since then, progress accelerated to allow the work to be done by fewer and fewer workers – from one person single-loom machines, to a single person flicking the switch on four clunking mechanized looms, and at the end of the century rapid automated machines firing threads through jets of water and computerized weaving able to produce a vast ream of fabric in seconds. This decrease in labour intensity through industrial automation is perhaps the greatest advance of the modern era.

Looking at the evolution of these machines reveals two striking things: the first, how rapid and remarkable the rate of progress has been; and the second, the effects of displacement of the previous forms of technology. At each stage of development, the disruption caused by the newer form of technology has largely led to the former becoming obsolete; confined to artisans or traditionalists who seek to continue the craft for cultural or aesthetic reasons. A demand for products produced using older forms of technology certainly exists however – in some cases the result is higher quality, with a greater level of individual attention. In others there is a kitsch and novel value to something woven by hand or loom- advertisers today call it bespoke.

Ours is perhaps the third generation (outside of the very, very wealthy) with the ability to actively choose products based on subjective value rather than direct utility and cost. It is only with the wealth of cheap materials and extremely reduced labour per unit of production that people begin, with utter sincerity, to question the value of wool versus cotton, polyester, or nylon; or whether it’s sourcing locally or from overseas. The average t-shirt from Kmart or Uniqlo is an unimaginable luxury only a few hundred years ago: the cumulative total of hundreds of hours spinning fibres and cleaning cotton; threaded and weaved over a loom or by hand. That this can now be performed en masse at low cost is something that has redefined the nature of ‘wealth’ for much of the world.

The example of automation in the textile industry is an illustration of the importance of human ‘time’, and the technological advances that are required to expand the realm of human capabilities and choice. As the debate about the role of automation in the developed world rages, it is critical not to mistake automation itself for issues of distribution. Closer to home we see the transition from human employees to self-serve checkouts and automated answering machines. This job destruction is not in itself a bad thing; except for the problem it creates of how wealth should best be distributed amongst the community in a world of rapidly advancing automation.

It is only when starvation is not an imminent possibility that you can choose where to eat; and it is only when the production of clothes takes an insignificant amount of labour time that you can decide what to wear. The evolution of Toyota from a simple textile manufacturer to a global technological powerhouse provides important lessons for adapting to industrial automation, but it also warns of changing socio-work arrangements that threaten to upend the status quo. As Toyota’s history shows, this has happened before- the opportunities only need to be seized, rather than feared.