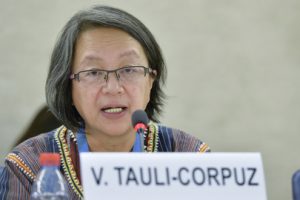 A UN Special Rapporteur has shone a bright light on Australia’s Indigenous practices and reached some dark conclusions.  Ms. Tauli-Corpuz’s end of mission statement detailed her findings that included numerous criticisms but also some praise in the way Australia manages its Indigenous population.

The Special Rapporteur said it was a priority of her trip to review the implementation of recommendations put forward by her UN predecessor as well as the findings from other authorities such as Royal Commissions and coroner reports.

“I find it disturbing that despite having been reiterated time and time again, many recommendations have not been implemented in practice,” she said in the mission statement.

While she praised the “strength of spirit and commitment” of Aboriginal and Torres Strait Islanders to find solutions to solve problems, she condemned the Federal Government’s efforts to work closer with communities. She made special mention of the Government’s relationship with one of the most important groups representing indigenous Australians.

“The key and constructive role played by the national representative body for indigenous people, the National Congress of Australia’s First Peoples, has been dismally disregarded by the Government,” Ms Tauli-Corpuz said.

She pointed out Australia had vowed to reset relations between Indigenous and non-Indigenous Australians in 2009 when it committed to the UN’s Declaration on the Rights of Indigenous Peoples. She went on to label as “alarming” the “failure to respect the right to self-determination and the right to full and effective participation”.

“The compounded effect of these policies has contributed to the failure to deliver on the targets in the areas of health, education and employment in the Closing the Gap strategy,” she said.

Ms Tauli-Corpuz said these failures had “contributed to aggravating the escalating incarceration and child removal rates of Aboriginal and Torres Strait Islanders.”

The statement also points out that only one of the seven Close the Gap targets, relating to youths completing Year 12, was on track; there was a suicide epidemic  among Indigenous Australians  and reiterated the criticism of the previous UN Special Rapporteur about the Northern Territory Intervention. Ms Tauli-Corpuz found the debate about 18C “disheartening”; the prevalence of racism “deeply disturbing” and the overrepresentation of Indigenous Australians in jail as “simply astounding”. She urged the Federal and state governments to reconsider funding cuts for support services, particularly advocates for change. She urged authorities to assess the benefits of rehabilitation programs and look into justice programs.

She was particularly concerned about child removal practices in Australia. Ms Tauli-Corpuz pointed out that 20 per cent of Indigenous children were in out-of-home care in 1996 when the “Bringing Them Home” report was published. She pointed out this figure had climbed to 35 per cent in 2016. She said the situation had now reached “critical levels”.

Her report finishes by calling for “adequate reparation, including compensation” be provided to the Stolen Generations; the need for a plan to counter violence against women and for authorities to make it easier to declare successful native title claims as protected areas.