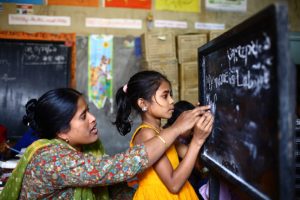 A study conducted by UNESCO (the UN Educational, Scientific, and Cultural Organisation) examines the correlation between poverty and the accessibility of education. Due to the high rates of children and adolescents who are out of school, or have not completed their education, the global poverty rate may not see a reduction.

The study also shows that the majority of these out of school populations are located in poorer countries. These countries generally have lower incomes and are located in regions including Sub-Saharan Africa, Central and Southern Asia, Eastern Asia and South-eastern Asia, and Western Asia and Northern Africa. Poverty rates also have an impact on gender disparities in education, showcasing that more females than males are likely to be out of school in low-income and lower-middle income countries.

As the study itself states, low levels of education and acquisition of that education can hinder economic prosperity, which would, in turn, slow down poverty reduction. According to the study, if all adults received two more years of schooling or completed secondary school, it would lift nearly 60 million people out of poverty. The study postulates that economic growth would see an increase in their income. This could be achieved through effective education policies that address the issues of drop-out rates. Universal access to primary and secondary education is necessary to decrease the out of school rates, and therefore, decrease the poverty rate.