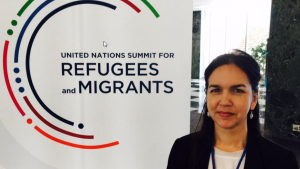 Senator Lisa Singh’s speech on the current humanitarian situation in Yemen and the issue of the reduced financial assistance of the Australian government to overseas development assistance.

On the 11 September 2017, Senator Lisa Singh presented a speech to the Australian Senate, promoting awareness to the current humanitarian crisis in Yemen as well as highlighting the Australian government’s reduced financial aid to overseas development assistance. Senator Singh urged the Australian government to reverse its cuts to Australia’s international aid budget in order to ensure the safe passage and required contribution of financial aid to the work of agencies, like UNICEF, other donors, countries in the region and humanitarian partners that provide critical assistance to vulnerable countries suffering humanitarian crises, such as Yemen.

According to the International Committee of the Red Cross, Yemen is the “world’s single largest humanitarian crisis” as a consequence of the “breach of the ideals and goals of international humanitarian law and international human rights law” by the country. Senator Singh emphasized the tragic consequences of the civil war between the Houthi rebels and the coalition of forces supporting the recognised president and, in particular, focused on the three million Yemenis that have been internally displaced, as well as the 10,000 who have been killed. Four million Yemeni civilians including 462,000 children, which equates to two thirds of the Yemeni population are suffering from acute malnutrition with shortages of food and clean water. On top of this, Yemen’s restrictions on imports such as much needed drugs and medical supplies, have also increased the number of deaths as well as the growing cholera epidemic in the country. These statistics justify the increased and urgent need for international recognition and humanitarian assistance to plight in Yemen.

Senator Singh focused on the work of UNICEF in conjunction with the World Health Organization which has provided aid to 3.5 million people across Yemen, Africa and Middle East as the crisis has unfolded.  UNICEF continues to aim to deliver lifesaving health, nutrition, WASH, education, child protection and social protection services to nearly 17.3 million Yemenis including 9.9 million Yemeni children. In order to achieve this, UNICEF has revised its appeal from US$236.6 million to US$339 million but as of July this year has only received $170.3 million. The difference that UNICEF is already making as well as the additional support it needs to achieve its future goals, needs to be internationally recognized and, more importantly, intensified. As Senator Singh emphasized, that Australia “can and must do more to ensure that the work of agencies which provide critical assistance to the world’s most vulnerable people is supported, promoted and made visible.”

Senator Singh acknowledged that Australia’s response to Yemen’s worsening humanitarian situation included committing $10 million in assistance in April this year. Yet Senator Singh also advised “this (contribution) alone is not enough.” Aligning with Australia’s commitment to the aims of the Universal Declaration of Human Rights and to the ongoing promotion and protection of international Human Rights, this is an opportunity for the Australian government to reinvigorate its commitment to international human rights standards. However, Senator Singh pointed out, Australia’s capacity to meaningfully contribute and make the required beneficial humanitarian impact has been curtailed by the Australian government’s reduction of the foreign aid budget. The abandonment of Australia’s bipartisan commitment of GNI growth and the 24.2 per cent cut to Australia’s development budgets since 2013, has taken Australia to its lowest level of spending in overseas aid as a proportion of GNI since records were first kept. Additionally, the 2017-2018 budget has further weakened Australia’s overseas aid spending with an additional $303 million being cut over the forward estimates. Senator Singh believes that “(Australia’s) aid program will continue to weaken” over the next decade and thus revising and ultimately committing to the reinstatement of Australia’s aid and development budget is needed from the Australian government.

It should be within Australia’s greater national interests to make a contribution to help end Yemen’s humanitarian crisis, to work with humanitarian partners and to uphold its commitment to international human rights. Senator Singh calls on “all Australians to remember the crucial importance of international aid and cooperation and to strive for a safe and harmonious community for all people by supporting organisations like UNICEF.” Senator Singh also calls on the Australian government to “commit to the reversal of these relentless cuts to Australia’s international aid budget.” The UNAA applauds Senator Singh for highlighting this situation to the Australian Parliament and the need for Australia to play a role in Yemen’s humanitarian crisis.