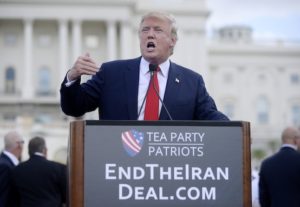 US Republican Presidential hopeful Donald Trump attends a Tea Party rally against the international nuclear agreement with Iran outside the US Capitol in Washington, DC, September 9, 2015. Photo by Olivier Douliery

There is currently much talk regarding the US and the Iran Nuclear Deal. US President Donald Trump recently stated that he would not recertify the deal with Iran, much to the concern of the international community. UN Secretary-General António Guterres has spoken out on the importance of the deal with Iran, stating that it is a “very important breakthrough to consolidate nuclear non-proliferation and advance global peace and security”. So what exactly is the Iran Nuclear Deal, and what does Donald Trump’s refusal to recertify the deal actually mean?

The agreement, commonly known as the Iran Nuclear Deal, is actually called the Joint Comprehensive Plan of Action, or JCPOA. This is a multilateral deal, signed not only by Iran and the US but also by the other four permanent members of the UN Security Council: China, Russia, France and the United Kingdom, as well as Germany, known as the P5+1. The agreement, signed on July 14, 2015, stated that sanctions on Iran would be lifted in return for Iran destroying or reducing its stockpiles of enriched uranium, and not creating any new heavy-water facilities. Iran has allowed the International Atomic Energy Agency to monitor all of their nuclear facilities to ensure that the stipulations of the agreement are being followed. Prior to the JCPOA, sanctions on Iran had crippled the economy, with all sanctions, both related and unrelated to their nuclear program, collectively adding up to the most sanctions ever placed on any country.

Last year, on the one-year anniversary of the implementation of the JCPOA, then Secretary-General Ban Ki-Moon affirmed the importance of the agreement, stating, “I remain certain that the JCPOA is the best way to ensure the exclusively peaceful nature of Iran’s nuclear programme and to realise the great aspirations of the Iranian people”. He further added, “combined with a robust verification regime, the agreement ended one of the Security Council’s strictest sanctions regimes, and provided Iran with the opportunity for greater engagement with the international community”.

As for Donald Trump’s push to amend or even pull out of the deal, the US President has specifically stated that the agreement requires tougher restrictions around Iran’s nuclear development capabilities, and tougher penalties should Iran break these rules. The matter has been referred to the US Senate, with President Trump stating that if the senate fails to amend the agreement, he will pull the US out completely. The US government has requested that the European nations involved in the agreement to do the same, however little support has been found. In a joint statement from France, Britain, and Germany, the three nations strongly opposed the renegotiation of the deal, stating “the International Atomic Energy Agency has repeatedly confirmed Iran’s compliance with the JCPOA through its long-term verification and monitoring program”.

As the JCPOA consists of an agreement not only between the US and Iran but with another 4 other countries, the consequences of this push by the US President to potentially pull out of the agreement are, at this stage, unknown. This move has been questioned by Iranian President Hassan Rouhani, in which he queried, “can a president annul a multilateral international treaty on his own?”. With the US Senate having 90 days to make their amendments before the US President decides whether to pull out of the JCPOA or not, an answer to Hassan Rouhani’s question should be known by early next year.