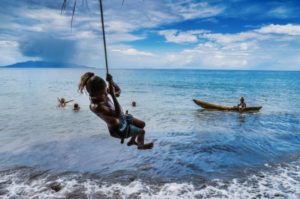 On November 12, at the United Nations Climate Change Conference (COP23) the World Health Organization in collaboration with the UN Climate Change secretariat and in partnership with the Fijian Presidency of the twenty-third Conference of the Parties (COP23), launched a special initiative to protect people living in Small Island Developing States from the health impacts of climate change.

The vision is that, by 2030, all Small Island Developing States will have health systems that are resilient to climate change and countries around the world will be reducing their carbon emissions both to protect the most vulnerable from climate risks and deliver large health benefits in carbon-emitting countries.

The initiative has 4 main goals.

“People living in Small Island Developing States are on the frontline of extreme weather events, rising sea levels and increased risk of infectious disease,” said Dr Tedros Adhanom Ghebreyesus, Director-General of WHO. “We owe it to these people to do everything we can to help them prepare for the future that is already washing up on their shores.“

“We in Fiji know all too well that climate change poses a serious threat to the health of our people. I’m delighted that we are launching this initiative – in partnership with the WHO and UNFCCC – to better equip small island states like ours with the knowledge, resources and technology to increase the resilience of their health systems, as part of larger efforts to adapt to climate change,” said Fijian Prime Minister and COP23 President Frank Bainimarama.

The Small Island Developing States have long been recognised as especially vulnerable to the adverse effects of climate change. Their situation is highlighted in the UNFCCC, by Ministers of Health at the 2008 World Health Assembly, and in the 2015 Paris Agreement.