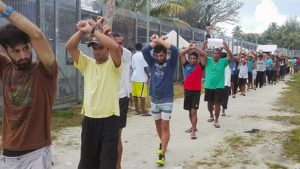 The Regional Representative of the United Nations High Commissioner for Refugees in Canberra (UNHCR), Thomas Albrecht, has warned the Australian government “the situation still unfolding on Manus Island presents a grave risk of further deterioration, and of further damage to extremely vulnerable human beings”. This follows the recent release of footage on November 24 of uniformed guards in the Manus Island detention centre beating detainees, including with the use of metal poles. More recently on November 25, Papua New Guinean authorities stormed the decommissioned detention centre, forcibly moving the remaining 328 men to newly created camps.

Prior to the closure of the centre, both the governments of Australia and Papua New Guinea were told by the UN that those kept inside would require professional medical attention, together with assistance from caseworkers, counsellors, and interpreters. However, since the closure of the Manus island centre occurred, no caseworkers, counsellors nor interpreters have been provided, and the medical care being provided is inadequate. Authorities in Papua New Guinea have also raised concerns about the lack of adequate facilities and support for the detainees of the centre, however their government reportedly lacks the resources and infrastructure to provide the appropriate services themselves.

Furthermore, the UNHCR has spoken about the offers being made to help refugees return to their countries of origin. This includes assistance in returning to some countries in which the conditions of human rights have substantially declined over the past year. On this, the UNHCR discussed one such example of a man returning home ‘voluntarily’ to his country of origin, stating “having been attacked by machete, and unable to get required medical treatment for a serious existing medical condition that had then been exacerbated, he felt he had no choice but to go back”.

When questioned about the situation on Manus Island, Foreign Minister Julie Bishop stated that  “nations respect our stand on people smuggling and we are working very closely with countries including Indonesia to ensure that the people smuggling trade is not revived”. According to the Australian government, 800 boats arranged by people smugglers arrived in Australia between 2007 and 2013, in which over 1000 people died at sea. While these strict government policies appear to have “stopped the boats”, approximately 1,200 people remain in detention on Nauru, with an additional 900 on Manus Island.